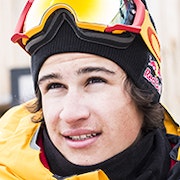 Slovenian freestyle prodigy Tim-Kevin Ravnjak is one of the rising stars of international snowboarding. His first victory in an international snowboard event came at the age of just ten, when he won the Burton Amateur Tour event in Klagenfurt in February 2006. By the following year, TK was already starting to win Burton AM Tours across the globe, and he went on to become the overall winner of the competition three years in a row.

In 2010, he took second place in both the slopestyle and halfpipe contests at the Burton European Open in Laax, and he went one better the following year, winning the junior slopestyle section at the same event. He also took first place in halfpipe at the 2012 FIS World Junior Championships.

Born on 5th November 1996 in the town of Celje, TK skateboarded and played football as a very young child, but became obsessed by snowboarding after his parents bought him a Burton Chopper when he was six. His first snowboarding trip was to Nassfeld, Austria, and he went on to make rapid progress honing his skills on his home mountain of Rogla – at the age of just ten he signed with Burton Snowboards.

TK certainly pulls out all the stops on his Nitro T1 snowboard, staying true to his life philosophy of ‘go big or go home’. In 2012, he scored a silver in halfpipe at the Youth Olympic Games in Innsbruck, and he is now aiming for glory at the 2014 Winter Olympics in Sochi.