More than 110 young snowboarders from 24 nations are registered for the most important youth snowboard event of the season, Ischgl, Austria. 2.-6. April 2014, all battling for the supreme title, and the chance to get a ticket for the next Air&Style!

This week, the Austrian town Ischgl is turning once again to the hot spot for future snowboard stars from all over globe: Only 2 days left until we celebrate the great showdown of the 2014 VÖLKL WORLD ROOKIE FINALS where the world’s best Rookies and Groms will be awarded in a 3 Star WST slopestyle contest.

Besides competing for the title of the World Rookie Champion 2014, the best young riders of the season have the chance to win many other high qualitative prizes, such as a freeride trip to Chile and a film shooting with Pirate Movie Production. The best male Rookie will receive a wild card for the first Air & Style Event in the upcoming season 2014/15.

Highest number of registration ever!

The phone lines of the organizers have been burning hot the past weeks, since the number of registered riders has never been that high:  More than 110 young snowboarders from 24 different nations are going to hit the slopes and enjoy a unique lifestyle event throughout the week.

Besides daily social dinners, several  workshops and the legendary “Aftercontest Party”, the World Rookie Tour organizing committee is proud to welcome a very special guest in Ischgl: Chuck Barfoot from the USA! The living snowboard legend will present the “History of Snowboard Design”.

Watch the video from the 2013 edition of the Volkl World Rookie Finals in Ischgl:

The Bulgarian Rookie Fest from 22nd to 23rd of March 2013 was the last of seven qualification events for the World Rookie Finals this season.

Read the full story here and watch the pictures here: The WSF World Rookie Tour is organized by the World Snowboard Federation in collaboration its member National Snowboard Associations, and it was made possible by Volkl, Blue-Tomato, energized by REDBULL. You can follow the WSF World Rookie Fest on our international media partners Onboard European Snowboard magazine, Cooler, MPora. 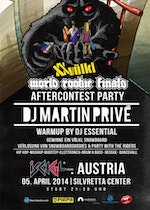 Give it up for Europe!

Neon is back in Cauterets, Pyrenees, on the 26th of April

Give it up for Europe!

Neon is back in Cauterets, Pyrenees, on the 26th of April