After two slightly underwhelming qualifiers, the men’s Olympic slopestyle final delivered. The conditions remained challenging, but the eleven riders (an injured Mons Roisland was missing) went all in.

The field featured a couple of plucky underdogs taking on the titans of slopestyle – and for all our predictions of a Norway vs. Canada battle, in the end it was Red Gerard from the USA who beat all comers.

“A whole lot of gushing, basically, and we love it”

After placing 4th at X Games 2018 (as well as qualifying in 1st), he wasn’t exactly an outlier in the way that Sweden’s Niklas Mattsson or New Zealand’s Carlos Garcia Knight were, but it was still surprising to see him top the board.

Naturally the snowboarding world has a lot to say about such a surprising and, let’s be honest, heart-warming result. Here are some of the best so far – we’ll update as more appear.

We enjoyed Halldor & Ethan’s props to Sage Kotsenburg after he took down the Sochi slopestyle, so it’s good to see them doing the same for Red Gerard.

This time around they (along with Tor Lundstrom) make a hash of shotgunning beer while they thank the young American for ‘saving’ competitive snowboarding.

A whole lot of gushing, basically, and we love it.

Of course big bro was going to weigh in – Brendan Gerard kept it short and sweet. 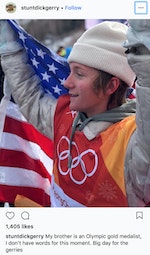 Maybe one day we’ll do a reactions piece that doesn’t feature former pro turned commentator Todd Richards – but it is not this day. 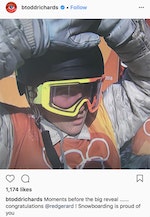 Red’s team-mate didn’t have the best Olympics, bailing on both of his qualifying runs. Still, he’s stoked for his compatriot. Given that Red’s been snowboarding since he was an ankle-biter, has gown up in the digital age, and has always been rather good, there’s heaps of old photos and videos of him from back in the day.

Expect a lot of shots like this one, from photographer Zach Hooper, to appear over the course of the next few days.

Everyone’s favourite cameraman is on the nostalgia tip too. After three freestyle events for men and women, with 18 medals dished out, we bring you our photographer Sam Mellish's bangers from the 2018 Games...

The Best And Worst Things About Pyeongchang 2018

The Games got some things right, and others spectacularly wrong

How national snowboard teams are using airbags and other new technology to chase Olympic success.