Max Parrot once again demonstrated that when it comes to big air snowboarding he’s the man to beat right now, as he took out the LA stop of the Air+Style yesterday.

Basically if it’s in a bib and there are jumps involved, Parrot looks pretty unstoppable at the moment. He’s on one hell of a run, having recently taken out the Laax Open slopestyle, the Air+Style Innsbruck and the X Games Big Air.

The old continent was well represented on the podium as Seppe Smits nailed second place, while everyone’s Rookie of the Year, Marcus Kleveland, came in third. With his win at the Beijing Air+Style combined with his second in Innsbruck, Kleveland’s consistent podium appearances means he bagged the Air+Style World Tour title.

We’d go deeper into this and let you know what tricks went down (although we can go out on a limb and state Max will have tripled his way to victory) but, being Euros, it was way past our bedtime when the finals rolled around – plus we wouldn’t dream of finding ways round geo-blocked streams. Luckily our homie Sami Tuoriniemi was there and fired over some shots allowing us to present you with a quick gallery recap until they sort it out and fire us a highlights edit.

[Update: Oh, it’s here kinda. Heavy on music and crowd footy, light on action, but there’s a Parrot front triple 16 in there.]

Here are the final standings: 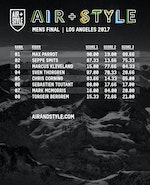 "If you were designing a slopestyle course, how would it look?"

“Which riders inspire and stoke you out today?"