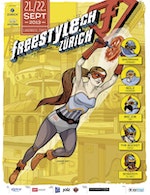 Countdown for a world class freestyle sport weekend in Zurich, Switzerland: on September 21/22, 2013 freestyle.ch will happen for the 19th time!

It’s time for freestyle.ch Zurich 2013. Once again and for the 19th time in a row on September 21-22, 2013 the freestylers will fly over the Landiwiese. 100.000 US$ prize money, prestigious titles and a great atmosphere will bring 50 top riders from all over the world to Zurich. Their performances will attract about 30.000 visitors to join the freestyle spectacle in those disciplines – snowboard and freeski big air, freestyle motocross and mountainbike dirt jump. Live concerts, signing-sessions and activities in the label world, on the Swissmilk skate plaza and the LAAX urban stairset will top off the breath-taking action.

World champion, younker, daredevil, air acrobat, board artist, performer on two wheels with or without engine – whatever they are called or whichever titles they’ve earned, these are the heroes of the air, the ones who will make our eyeballs pop out. The lightness and aesthetics of freestyle are the characterizing elements of Saturday’s style sessions, which will be guaranteed by a top-class starting field, including also those two ladies – Sina Candrian and Virginie Faivre.

The crossover session on Saturday at 6pm will be a challenge for the public, the organizers and the riders. All of them are involved. This unique show contest offers a competition across four different disciplines – snowboard and freeski big air, FMX and MTB dirt jump. At the end there will be only one winner, the crossover champ. This champion will be chosen by the enthusiastic crowd.

Swiss local riders such as Iouri Podladtchikov (2009, Snowboard) and Elias Ambühl (2012, Freeski) have already won the title. But the freestyle.ch audience isn’t too patriotic and not made of snowboarders only. In 2011 the crowd chose Vince Byron, a BMX rider from Australia, for the crossover champ. In 2010 the privilege went to the US boy Tom Wallisch (freeski) and in 2008 to the Brasilian skateboarder Sandro Dias for their extremely sick performances.

The 2013 starting field of Sunday’s contest day is going to be international once again. 2012 freestyle.ch champ Dany Torres (ESP) and swedish ripper Henrik Harlaut (SWE) want to repeat their success from the previous year(s) in FMX and freeski. Eager to get the top podium in mountainbike dirt jump is the leader of the world tour Sam Pilgrim from UK. Sebastien Toutant (CAN), Werner Stock (AUT)  and Stale  Sandbech (NOR) are  representing a  high-level  trio for progressive tricks on the snowboarding big air. And don’t forget the Swiss local heroes such as Iouri Podladtchikov, Christian Haller and Pat Burgener.

The run to get a True Fan Ticket including a give-away was tremendous, it’s already sold-out. But don’t worry! There are still other tickets available for freestyle.ch Zurich 2013 and its legendary parties. Go to www.freestyle.ch/tickets or to a Starticket booking office, www.starticket.ch .

Watch all of the action and read what went down at the first big air contest of the year!

Once again freestyle sport at its best will be offered at the Landiwiese in Zurich, Switzerland; an event, which affected essentially the history of freestyle...

Watch all of the action and read what went down at the first big air contest of the year!

Once again freestyle sport at its best will be offered at the Landiwiese in Zurich, Switzerland; an event, which affected essentially the history of freestyle...