From March 23 to March 25 the Grandvalira Total Fight Snowboarding will once more go down in Andorra’s El Tarter resort… And, in a first for the event, the competition will also be broadcast live on Grandvalira Facebook

The Total Fight crew are getting warmed up for an edition with new surprises and with the aim of continuing at the top of the snowboarding scene worldwide. El Tarter snowpark prepares to receive some of the best slopestyle riders, seeing as in the Elite category of the World Snowboarding calendar.

From March 23 to March 25, Andorra will be the focus of the freestyle planet with the arrival of the best male and female slopestyle riders around, who’ll be pumped to take on the creative setup the shapers have planned.

The Total Fight technical team is designing a fluid yet technical slopestyle circuit that will allow riders to perform their best tricks.

At the end of March, the fourteenth edition of Total Fight arrives in El Tarter. The finals of the competition that can also be broadcast live on Grandvalira Facebook. See you there, or check the live coverage on them internettos. 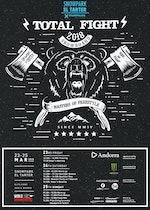