Tune in right here on February 28th at 15.45 CET for the official livestream of the Ale Invite Big Air in Sweden, presented by Kevin Bäckström and Tor Lundström. 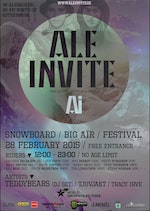 With some of the world’s best kicker riders in attendance and a stacked music line up to boot, this promises to be one show not to be missed.

Kevin Backstrom and Tor Lundstrom have invited some of the prime big air kicker crushers from across the globe to send it in Sweden’s biggest snowboard competition – which is also an official big air top on the World Snowboard tour.

Sweden’s biggest snowboard competition will now also be a stop on the WST, the nr1 world tour of snowboarding. Ale Invite is thereby confirmed internationally as one of the big tour stops this year. The riders points in Ale Invite will also affect their world ranking position. So brace yourselves for even bigger airs and tricks the 28th February when 20 of the best riders in the world have yet another incentive to perform at their best.

If you are unable to make it and see the competition live and on the big screen in Alebacken, 20 km from Gothenburg, don´t worry. Through our media partners we will send out a live stream so you can follow the whole competition online. But of course, nothing beats the live experience, so if you are able to get here, this is guaranteed not to miss.

Oh yeah, did we mention it´s free entrance to the event?

Some of the craziest snowboarding ever will go down at the Ale Invite and you do not want to miss a second of it! Stream in live or show up to support the riders as they battle their way for ranking.

Tune into the live stream, right here on February 28th 2015!

Check out all of the shots from the Austrian leg of the Vans Hi-Standard tour: a contest focusing on style.

Check out all of the shots from the Austrian leg of the Vans Hi-Standard tour: a contest focusing on style.

Download this sick shot of Zak Hale for your desktop wallpaper