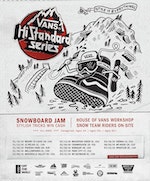 Vans Hi-Standard is back! Ahhhh yeah, always one of the sickest comps because style is everything. Nothing over a 720. Get down to Chamrousse, 38, France on the 20th February for a chance to be in it!

Vans is kicking off 2016 with the return of the Vans Hi-Standard Series, an international contest series inviting snowboarders to showcase pure style in a thrilling jam format. Touring across the US, Canada, China, Korea and France, the Vans Hi-Standard Series will feature an original big air format where riders are judged by individual style only, with no rotations over 720 allowed.

Starting on January 16th at Mount St-Louis, Ontario Canada, riders will compete in a unique exhibition of style and creativity. The Hi-Standard Series will award over $60K in cash prizes and challenge riders to push their imaginations with innovative tricks.  The ‘Van Doren Rail Best Trick’ offers cash on the spot for the most inventive maneuvers. Vans will also reward and name an MVP: the ‘Most Improved Rider’, and a Worst Bail at each stop of the tour. With nothing beyond a 720 allowed, only the most creative competitors will be considered for the billing.

Additionally, in selected resorts, Vans will present a House of Vans workshop, inviting spectators and family members to customise their own pair of Vans alongside an artist from the Vans Family. Fans and competitors can also expect to see familiar faces from the global Vans Snow team throughout the tour. Now is your chance to stand out—style is everything!

Style is Everything: Nothing Over a 720 at Vans' aesthetically-drived contest in Chamrousse, France.