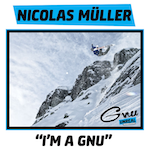 It’s official folks, Nicolas Müller is officially on GNU, and we think it’s a match made in heaven.

Gnu is proud to welcome Nicolas Müller to the team.  Nico’s riding, personality and very being compliments everything Gnu believes, strives for and holds dear.  For Gnu founders Mike Olson and Pete Saari snowboarding and building dream boards has always been about creative expression, problem solving and holding “the real world” at bay for as long as possible.  This unreality also exists in how Nicolas uses his snowboard to interpret the world around him.  Few riders have ever channeled a more original and explosive approach to mountain riding than Nicolas Müller.  Creativity and a free spirit are everywhere in his snowboarding, his relationship with the sport, the culture and it’s impact on the world.

Nico is joining a team of finesse freestyle masters such as Forest Bailey, Blake Paul and Temple Cummins.  This crew paired with Gnu’s bold engineering, a commitment to art, artists and artistry, a commitment to safe working environments for snowboarders building snowboards in the USA, and the environmentally nicer building practices of Mervin Manufacturing all adds up to an unreal mixture of skill, design, aesthetics, adventure and progression.  It’s almost too good to be true.  With Nicolas Müller, Gnu is Unreal Snowboarding.

Life never stands still and we’re here to make the most of it. Riding for Gnu is a fun adventure I can not miss.  The decision came naturally when I found Mt.Weird. I am very excited to climb it and ride it every day.  ~Nicolas Müller

Mark McMorris learning the backcountry ropes from Jake Blauvelt, Terje Håkonsen and Nicolas Müller in Revelstoke, British Columbia, taken from 'Snowboarding: For Me'

Mark McMorris learning the backcountry ropes from Jake Blauvelt, Terje Håkonsen and Nicolas Müller in Revelstoke, British Columbia, taken from 'Snowboarding: For Me'