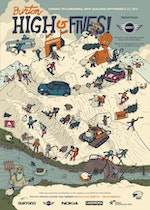 Sixty of the world’s top snowboarders are preparing to make their way to Wanaka, New Zealand for the second annual 2013 Burton High Fives presented by MINI snowboard competition, including Olympic hopefuls Kelly Clark (USA), Ayumu Hirano (JPN), Danny Davis (USA), Peetu Piiroinen (FIN) and Mikkel Bang (NOR). A key stop for snowboarders on the road to Sochi, the event will take place in and around Cardrona Alpine Resort from September 8th – 13th, and will boast world-class halfpipe and slopestyle contests, along with Kiwi-inspired, adventure-filled off-snow team challenges.

“Not only is the Burton High Fives event a world-class snowboarding contest, but it also has all these other fun off-snow team events going on,” said Kelly Clark. “I find it cool to be part of a team working towards something bigger than just my performance on snow. It’s a nice change of pace.”

The good times in New Zealand begin on September 8th with 2013 Burton High Fives competitors participating in the MINI Track Challenge, a speed, style and skill-focused challenge to drive MINI Countryman ALL4 and MINI Paceman Cooper S vehicles at Highlands Motorsport Park in Cromwell, Central Otago. Then on Monday, September 9th, 12 teams of riders will compete in top-secret, off-snow challenges in the adventure capital of the world.

Following the off-snow challenges, the High Fives snowboarding competitions will get underway at Cardrona Alpine Resort with slopestyle finals on Thursday, September 12th, followed by halfpipe finals on Friday, September 13th. The top three men and women from each discipline, along with the best overall team of riders from the on and off-snow events, will take home World Snowboard Tour points and a piece of the $80,000 USD prize purse.

In addition to watching incredible snowboard competitions from September 10th-13th, visitors to Cardrona can also enjoy an interactive sponsor village with giveaways, plus a free demo from Burton where you can try out all the latest boards, boots, and bindings. And the fun doesn’t stop there. In the evenings, Burton is thrilled to host a series of free events at the official High Fives lounge at Urban Grind in Wanaka from September 10th-13th.  Après specials begin daily at 4pm with music starting at 8pm, so make sure to come out and mix it up with High Fives riders. On Friday, September 13th, don’t miss the official Burton High Fives After Party with two of New Zealand’s premier musical acts, Ahoribuzz and Bulletproof. The party kicks off at the Lake Wanaka Events Centre at 8pm and continues late night back at Urban Grind. Tickets for the after party can be purchased here.  For more good times, be sure to stop by the High Fives experience in Queenstown at the Village Green from September 4th – 7th and check out the latest vehicles from presenting partner, MINI and more.
High Fives Live Webcast and Broadcast:

If you can’t make it to New Zealand, there are plenty of ways to experience all the action each day. In addition to daily coverage of the competitions, you can also check out event videos, find live scoring, real-time standings, run replays, tour rankings, rider interviews and bios, as well as a live webcast schedule and full webcasts for on-demand viewing at www.burton.com/HighFives.  And be sure to check your local TV listings for the 2013 Burton High Fives highlight show, scheduled to air in the U.S. and around the globe later this fall.

For more information on the 2013 Burton High Fives, including live webcast schedules, confirmed rider lists and more, head to www.Burton.com/HighFives. And get daily updates about the event at facebook.com/burtonsnowboards, twitter.com/burtonsnowboard and @burtonsnowboard on Instagram – hashtag #BurtonHighFives

A big thanks to MINI and Nokia for their support of the second annual High Fives event.

In 1977, Jake Burton Carpenter founded Burton Snowboards out of his Vermont barn and has dedicated his life to snowboarding ever since. Burton has played a pivotal role in growing snowboarding from a backyard hobby to a world-class sport by creating ground-breaking products, supporting a team of top snowboarders and pushing resorts to allow snowboarding. Today, Burton designs and manufactures industry-leading products for snowboarding and the snowboard lifestyle, including snowboards, boots, bindings, outerwear and layering as well as year-round apparel, packs/bags and accessories. Privately held and owned by Jake and his wife, Burton President Donna Carpenter, Burton’s headquarters are in Burlington, Vermont with offices in Austria, Japan, Australia, California, Canada and China. For more information, visit www.burton.com. Follow our line at facebook.com/burtonsnowboards and twitter.com/burtonsnowboard.

MINI is involved in action sports around the world through cooperation’s and sponsoring activities. As a partner of trend-conscious sports, MINI supports young and creative sportspeople and, in so doing, promotes the development of their sport. MINI has been the official presenting partner for the Burton Global Event Series since 2011. For more information, visit www.MINI.com.

Nokia is a global leader in mobile communications whose products have become an integral part of the lives of people around the world. Every day, more than 1.3 billion people use their Nokia to capture and share experiences, access information, find their way or simply to speak to one another. Nokia’s technological and design innovations have made its brand one of the most recognized in the world. For more information, visit http://www.nokia.com/about-nokia.

Cardrona is a relaxed and friendly Ski Area that has been putting smiles on skiers and snowboarders for 35 years.  Explore it all – wide open beginner trails, pristine groomers, fun freeride terrain and world-class parks and pipes. Whatever your level we’ve got the snow for you! For more information, go to www.Cardrona.com.