The GB Park & Pipe Team crew have kicked off a campaign which they hope will help communicate the message that as much as bib boarding these days is about podiums, golds and Olympic spots, fundamentally it’s about “Fun, Collaboration, Passion and Progression”. To do this, they’ve enlisted the services of master snapper Matt Georges to produce some good old fashioned iconic ‘ad’ shots.

Contest riding, with its systematic event- and judging formats often leading to multicorking monotony, can get a bit of hate these days (to be fair, contests weren’t exactly beloved back in the day either). The contest environment – with its rules, regulations and apparent pursuit of an Omega Point in which all the riders can do all the tricks all four ways and all the tricks are utterly unattainable to regular snowboarders – can seem disconnected with the freedom and fun many associate with the sport.

On the other hand, wanting to compete with one’s peers is totally natural, sometimes top-level contests are utterly bonkers to watch, and these events regularly serve as an opportunity for riders to hone their skills and get their names out there. Your Svens and your McMorrises and your Ståles… even Travis Rice came pretty close to winning the (as it was then) TTR World Tour back in the day. For Lesley McKenna – and her colleagues at the GB Park & Pipe setup – it was important for them to get the message out that as much as national teams can get – and occasionally do deserve – a bad rap, for the GB guys currently it’s as much about inspiring new blood to get into snowboarding and see how rewarding it can be on several levels.

“Things have changed a lot in the boardsports business,” says Lesley. “It is harder now to make ends meet as a pro rider than it was a few years ago and almost impossible to get your foot in the pro rider door. Throughout these changes one thing has not changed, however, and that is how much fun snowboarding is, how it brings people together and helps individuals push their own limits regardless of their level. Contest riding and riders have traditionally got a bad rep and it has been suggested that they put winning above these commonly shared ideals but at GB Park and Pipe that is definitely not the case. Our riders ride to have fun first and foremost, and collaborating with each other on progressive tricks is part of that fun.”

Noting that, increasingly, national teams are top class riders’ main sponsors, and that these riders’ tend to inadvertently become snowboarding’s ambassadors to the mainstream, “we wanted to not only set things up to support the riders in the right way but also to communicate what we feel are important values to the outside snowboarding world.” Seeing what they perceive to be a decline of the kind of iconic images contest riders of old used to rack up, she and the GB crew set out to redress the balance with a #lovesnowboarding campaign shot by our old buddy, photographer Matt Georges .

“Fortunately GB Park and Pipe are in a position to do something about this and this is unusual as a national team,” continues Lesley. “We believe that supporting the athletes in a way that they feel supports their career is going to lead to the most progressive riding and we also believe the fun, collaboration and passion involved must be preserved at all costs. Part of this is promoting the progression of the riders to the next generation and also to the general public interested in snowboarding because fun, passion, progression and collaboration are accessible to everyone who snowboards. To that end we are running an ad campaign in the old school vein, shot in Perisher, by Matt Georges with the simple message #lovesnowboarding.”

Matt hooked up with the GB crew in down under last summer and – as you’d expect from one of the finest moment makers in the game – snagged a bunch of killer shots of the team. “For sure the snowboard kids who live in Sven Thorgren’s town would consider him an icon,” Lesley concludes, “and we know that the UK kids consider the GB Park and Pipe riders to be hero’s of a kind.”

Go check the shots on the @gbparkandpipe Insta, or in #lovesnowboarding 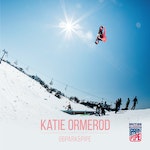 The new park overlooking IBK – Axamer Lizum's Golden Roofpark – has been pulling in the local boarders and getting them hyped since it first...

Win cash and doodah store credit by simply filming with your friends and Instagramming. Easy!

Get you and your mini-mes to Sankt Johann, Pongau/Austria from 18-19 March 2017 for packed schedule for kids and parents.

Hard to believe yet absolutely true: April 1st 2017 is the day the biggest Longboard and Old School Snowboard Event is of legal age!  Conceived in...

Innsbruck, watch out! Something rad is on its way as this new snowpark is about to open...