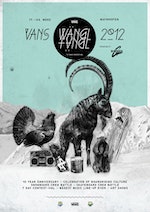 One of the greatest ‘contests’ in snowboarding, the W├żngl T├żngl will hit Mayrhofen once more for its festival of fun from March 17-24 2012. This year – the W├żngl’s 10-year anniversary – there’ll be open qualifying in addition to all the usual creative radness, so read the deets and get involved…

Here’s the info we got from our friend Rian at Vans, purveyors of awesome skate- and snow kicks and the brand who’ll be helping ensure the event goes off like one of those firecrackers you only seem able to buy in France, or Afghanistan. We’d try and re-write this and drop our own lick on the news, but seeing as this has been happening outside all day long our attention span and professionalism are shot. Apologies, and over to you, Rian…

The 10th anniversary of legendary week long W├żngl T├żngl snowboard, skateboard, music and art ŌĆśContest-ivalŌĆÖ will take place from the 17th to 24th of March, in its traditional home base of Mayrhofen, Austria.

Vans is stepping up its involvement in 2012 as the title sponsor of the event. The Off The Wall spirit will be alive at this birthday bash and celebration of boardsports culture.

The 2012 Vans W├żngl T├żngl launches an all new open qualification format to create the heaviest gathering of shred crews on the continent at the notorious Vans Penken Park, customised for the event with the Red Bull End Section by ├ästhetikers Steve Gruber and Wolle Nyvelt.

Previously the event has been ŌĆ£invite onlyŌĆØ and the new format will open the event up to create a level playing field for the best crews in Europe to show up and gain notoriety at this legendary event.

Three person teams can register on a first come first served basis beginning the 1st of December 2011. The full details of registration and qualification will be available at wangltangl.com in the coming weeks.

The 16-team, head-to-head, knockout format T├żngl Team main event is the highlight of the mountain based snowboard contest. Taking inspiration from our surfing brethren, no team is eliminated in the first round giving everyone a second chance to go for the 15,000 Euro (21,000 USD) total prize pool.
The event is and always will be, designed by riders for riders incorporating the unique ŌĆ£one team, one scoreŌĆØ judging system.

Skating will take a new direction with a new location for 2012. Think concrete. More information to come soon.

Stay tuned for upcoming information about the art component to this one of a kind event.

Thanks to the Sponsors: Vans, G-Shock, Red Bull and Mayrhofner Bergbahnen

January 6 2012 will see Mayrhofen's Vans Penken Park once again open its doors to some of Europe's most promising rookies, allowing them to pit...

January 6 2012 will see Mayrhofen's Vans Penken Park once again open its doors to some of Europe's most promising rookies, allowing them to pit...