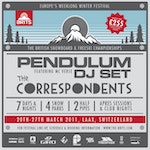 The BRITS Music & Winter Festival is returning to Laax in Switzerland with a week of finest snowboard and ski action with seven nights of premium partying from 20th – 27th March 2011.

Next to the Protest Slopestyle, SNO!zone Halfpipe, Giro Big Air and Trespass Snowboard/Skiercross Championships with top athletes such as Olympians Ben Kilner, Zoe Gillings and three times X-Games Gold medallist, Jenny Jones and tons of budding amateurs, groms and rookies, there will be some heavy party action going on as well, with festival heavyweights Pendulum as headliner and a performance from one of the hottest up and coming acts The Correspondents.

A week’s package deal starts from just £255 and includes seven nights accommodation, seven days lift pass and that all-important festival wristband, which provides you with FREE entry to club night shenanigans plus a bevy of discounts and event privileges.

For the 10th time, talented rookies from all over Europe will gather at the Crap Sogn Gion in Laax from December 11th - 12th for...

For the 10th time, talented rookies from all over Europe will gather at the Crap Sogn Gion in Laax from December 11th - 12th for...