Few words can describe Kirbie. Not only is he a great friend, he is also a nice buddy.
He is a shy guy, but that doesn’t make him any less cute. The Aragorn of snowboarding from Umeå, Sweden, has probably landed more tricks than this other guy from Umeå (Viktor Wiberg – Gollum). Kirbie shreds like a beautiful beast, sliding rails and jumping over stuff with just the right moves. He is one of the most underrated snowboarders we know, and we love him for life. But why stop there?

I don’t know but my sister and brother both snowboarded when I was a kid and then I started riding with their old boards with some friends.

Who were the riders that influenced you when you were a grom?

Hampus Mosesson and Jakob Wilhelmsson. I didn’t know that much about the American riders back then.

What movie did you watch over and over as a kid?

I got a 411 movie that I played like a thousand times but when the Swedish movie Flavour came out then that was all I watched. I still think that that one is one of the best snowboard movies ever. 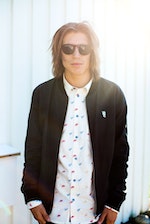 How did you get your first sponsors?

It was a guy named Niklas Byström that helped me to get in contact with Santa Cruz and they became my first sponsor ever. Thanks to Niklas for that.

Describe the scene in northern Sweden.

During the summer the sun is up all the time and its a bit confusing but really nice sometimes. During the winter it’s dark almost all the time; really cold and depressing but it is also snowboard season so it is all good.

Have you ever killed an elk? Or a reindeer?

Haha, YES! But not with a rifle only with Eric Johanssons car!

When I was in school I was only riding park but nowadays I have to say that I almost only ride street stuff, but I try to ride park as often as I can. But I like to do rail jams but I don’t get the chance to ride them that often.

We first heard about you from the Ducksjen movies. What was that all about, how come they stopped after 2 movies and why was there so much male nudity? And disco dancing.

Fredrik Perry introduced me to Kasper (the Ducksjen filmer) when we were at Folgefonna and we did a Battery film competition together. After that i started to film with them and that was super funny! You know stop when you are on top, haha. The nudity and disco dancing is a part of an old and proud Scandinavian tradition passed down from generation to generation. To judge by all the questions we get about it I think that peoples like it, haha.

I like to ride around in the park and just chill but I also like to do super scary things in the streets. It’s a different feeling but I want to do both – it is always fun to make something that you didn’t think would work but sometimes I get really tired of that and just want to go and ride pow (I can absolutely not ride pow).

Have you travelled much? Where’s been your favourite place so far?

I haven’t traveled that much but it is always nice to be on the road with my crew around in Scandinavia. This year I also went to Superpark and that was sick! I was really stoked on that even if i got injured third day, haha.

Front board on a church wall in Erik's hometown Umea. Photo: Daniel Tengs

You were shooting for the Scandalnavians project last winter. What can we expect?

This season was good and I think that everyone got really good shots. I hope that this will be the best movie this far from Sweden! I say that “expect the best movie ever from Sweden” to put some pressure on Kuske on the editing.

It seemed that Swedish riding was a little bit on the wane a few years back. Now, there’s the Random Bastards crew and the upcoming Scandalnavians movie and things are looking good. Would you agree and if so what’s the reason?

Yes, I agree! I think one reason is the Random Bastards movies, it put some of the best riders from Sweden together and push each other to do better and am really stoked that I still can ride together with my Umeå crew.

Whose riding stokes you out these days and why?

What one trick would you put in Room 101?

Hmm, I like to see creative spots and creative thinking so maybe I’m a bit bored of spins/swivels, but if it is one trick I think it is 50-50 360 off. It can be cool sometimes but it is a bit “over used”.

I hope that I can travel more, do some nice competitions and film some shots that am actually stoked on. Shit, that was the most boring answer ever!

What’s the raddest thing about snowboarding?

That its so many different styles and type of riding that you always get amazed to see riders do things that you never thought about. That makes it fun and exciting year after year.

What’s the lamest thing about snowboarding?

Tell us a secret.

Ludwig Lejkner once told a story to Method Mag about me crapping my pants in his car on the road to Sälen. The true story is actually the other way around – that Ludwig had the accident and put the blame on me and that’s why we arrived late to Sälen that day.

What’s the first thing that goes through your head after a slam?

I get a bit sad that I haven’t learned to be better at this in all my years snowboarding.

What’s the first thing that goes through your head after stomping a new trick?

How much time do you spend on the internet?

Way too much. I’m working on that.

Is the internet good or bad for snowboarding?

Not for the local snowboard shops but I think it is good for snowboarding that everyone has to come up with new stuff all the time. Then I think that it is a bit bad that internet parts get more views than parts in snowboard movies. I really like the snowboard movie concept and I don’t want that to die out.

When you’re an old fart and look back at your time snowboarding, what do you hope to have achieved? Cash, money, hoes? Olympic golds?

Definitely not Olympic golds, don’t think that I’m going to get cash money and hoes….. But I hope that I can travel more, do some nice competitions and film some shots that am actually stoked on. Shit, that was the most boring answer ever!