Kooks, Barneys, Jerrys, Dorks… snowboarding’s in a bit of a slump right now so what it desperately needed is more partially evolved humans to start mobbing the slopes and buying all that moth-eaten kit lying unsold in warehouses. This is our bid to help.

It’s been scientifically proven that people with zero style and questionable social skills can be attracted like moths to a flame to snowboarding by ensuring they’re able to bemuse and annoy these so-called ‘core’ snowboarders with their approach to both fashion and social interactions with their fellow mountain user.

So we assembled this handy guide to obtaining the keys to Kookdom. Share with your friends who work in banks or who’ve looked unwell since that Panama Papers story. You can thank us later, snowboard industry!

The best thing about snowboarding is not the “having fun with your friends” cliché that everyone trots out. If it were, the sport would be awash with cash and smiles which clearly isn’t the case. No, the best thing about snowboarding is boasting about how sick, rad and gnarly you are in the bar. Everyone knows the hardest possible thing to do on a snowboard is ride down a black run, so make sure you sideslip one, fall over, slide for a few hundred metres, get back up, sideslip more tentatively, and then claim that shit you fucking ROCKSTAR!

There’s a reason that your hat and goggles are not attached to one and other, and that’s so you can get awesome and flash your forehead skin. Don’t make the mistake of ensuring your beanie is constantly sat tucked under the top of your goggles – you’ll be getting radical and therefore you don’t want to overheat. Just don’t forget your sunscreen!

Let’s face it: the reason people snowboard is to be DANGEROUS and EXTREME, thereby enhancing the possibility of getting laid. While snowboarding in itself does present the opportunity for actual bodily harm, you can increase this exponentially by following a few simple steps. The easiest is head to the park and loiter on the landings of jumps – either by slowly traversing them admiring the view or, if you’re really serious, bringing your friends along for a picnic. Before you know it you’ll have snowboarders whistling past your head and the potential for concussion, broken bones or decapitation will instantly go through through the roof! Another, albeit less straight-forward, option is to head off the marked runs without a clue where you’re going or what you’re doing. Jim Morrison, Marilyn Monroe and Heath Ledger have been dead for years, yet people still lust after them. You, too, could join their illustrious ranks!

Sadly helmets have been slimmed down drastically from the days of yore when they would make you look like, well, a helmet. Today’s incarnations offer the same protection with significantly less weight and bulk, but luckily in certain rental shops and car boot sales you can still find the bulbous, gigantic variety to make sure your Kook game is on point! Don one of these and wear sunglasses, or if you’re lucky get the version with the flip down fighter pilot visor thing. Or better still, if you’re after the apex of nouveau-riche Kookery, get a Ruroc to match that new Porsche Cayenne you just bought! 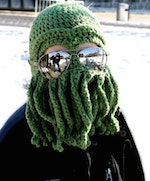 Because you’re far from home, nestled in the frigid embrace of a mountain valley, it’s perfectly acceptable to wear attire that if you were at home would likely get you shot. Live free and be wild by heading to your local internet superstore and purchasing one of those Eisbär hats with the earflaps and fake fur hair stuff, or better still simply Google ‘cool snowboard hats’ and hit the image results button. Beware, though, nestled in those images are a couple of things actual snowboarders might wear. Avoid these at all costs!

You used to hold the record for jumping kids from your block on your BMX back in 1987 and you like speed. Snowboarding is barely any different, so when you feel the need to impress your mates and get ‘freestyle’ on some jumps don’t take a moment to sit there, see what kind of speed you need to clear the deck or if it looks like the transition has some kinks to be avoided. That’s for pussies! Just strap in, shout loudly to your friends/casual bystanders to watch and drop in blissfully unaware of anything that’s about to happen. You got this!

Film Yourself Doing Every. Damn. Thing.

Cruising the blue run? Film that shit! Sideslipping through powder? Film that shit! Having a shit? Film that shit! Make sure that whatever you’re doing you’re able to grab those 15-seconds of fame by recording every last thing you do on the mountain and beyond, no matter what. While the ‘radical unicorn’ method of a GoPro on an unfeasibly large helmet (see above) is adequate, it’s actually hard for others to tell if you’re actually filming. God created the Selfie Stick for a reason, so pair one with your new mobile handset of choice because nothing screams “I’m the shit and I’m having the time of my life while you dicks are in the office” more than a 15-minute cat track traverse clip compressed to 2kb and emailed over patchy Austrian WiFi. Remember, if a picture paints a thousand words, a video must paint a million! And everyone needs a million words on what you did on holiday. Fact!

Some might argue that where you grab your snowboard is irrelevant seeing as the thing is already bolted to your feet. Fools. By grabbing you can demonstrate your personal style more effectively. Sure, you could make life more difficult for yourself and grab between the bindings or on the nose and tail, but that’s kind of a pain in the arse and you want to show the world that YOU DON’T FOLLOW THEIR RULES, right? Screw those idiotic die-hards and their insistence on grab placement; grab the easiest spot you can – just outside the bindings – and CONTORT like an orgasmic gibbon. The Tindy is the most well-known of these ‘illegal’ grabs, but don’t forget the humble Nute, the fabulous Tailfish and, of course, the subtle sexuality of the Nelon. And as for the bootgrab… if it worked for Shaun White it can work for you, too!

The Method is revered in snowboarding circles as the King of Tricks. The good news is that you can get in on the act easily! Much like with the grabs above, though, there’s no sense in spending time honing this art form when you can basically do the same by catching some air and rapidly bending your knees behind your now stupendously arched, air-humping back. To get your Kook-ometer to 11, grab the far edge, but don’t worry too much about holding on properly; a simple hand slap still counts!

Do you want to be SEEN on the mountain or blend into obscurity? That’s right, you and your crew deserve to be noticed and bold, strong, bright colours will help – think fire red, sky blue or toxic yellow and you’ll be on the right path. Either head-to-toe or mix-and-match are acceptable; there are few styles finer than rocking the bright red jacket and pant combo, but equally the blue jacket/yellow pant look is POWERFUL. You could even up your game further with some large colour blocks on your outerwear. This style was actually popular with real snowboarders in 2008, like the brothers Helgason here, so you’ll be totally on fleek!

Outerwear is great, protects you from the weather and all that, but for the absolute apex of on-hill Kookery you need to hit the slopes in fancy dress. Superheroes are acceptable if a little passé, but we would recommend taking your cue from the animal kingdom – penguins, crocodiles and cows replete with functioning Jaeger-dispensing udders FTW!

It’s a lesser-known fact, but park shapers are such generous folk that not only do they build beginner lines to help encourage the blossoming of freestyle talent, they also make jumps onto rails wide enough that you can also use these to catch air and get rad. You can sleep safe in the knowledge that not only will you improve your skills in a low-consequence environment, you’ll also make new friends int the park as everyone will be desparate to talk to you!

Excessive Application of Zinc that Shayne Warne would be proud of

Because you’re significantly closer to the sun when perched on the top of an alp, the solar radiation is like really way hotter or something. As no one wants to end up looking like Darth Vader at the end of that shit Star Wars film when he gets pulled out of the lava river and has to wear a cool, albeit restrictive, cyborg suit and then scream “Nooooooooo!” really badly, you should always lather up with sunscreen. Everyone does it, but to make sure your entrance to Kooktopia is assured, make sure you get that stuff that doesn’t rub in no matter how hard you try, leaving you appear permanently frightened, or Finnish. Your lips, cheekbones and nose are even even closer to the sun, so apply thick white coats of zinc paste there. DON’T use neon zinc, as there’s the real chance someone might think you’re making a post-ironic nod to snowboarding’s 1980s halcyon days and Damian Sanders. You have been warned!

You’ve mastered your snowboard’s edges, but the actual turning from one to another is still a problem? Fear not! Simply take your ‘falling leaf’ technique to a whole other level of awesome by getting it faster and faster until you achieve the Holy Grail of ‘Turbo Leafing’. With this technique locked in you’re guaranteed to be at least as fast as a four-year-old ski child, and as you blitz side-to-side down the hill make sure to tunelessly sing to show just how much fun you’re having. This method is even more radical when applied to powder. There are even rumours of Turbo Leafing becoming a surprise addition to the 2018 PyeongChang Olympics, so keep at it and you might even be able to represent your country and grab some glory!