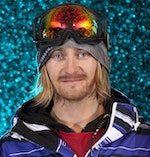 With the Helgason brothers’ second movie, Pepping!, set to drop like a vat of burning oil on snowboarding’s interconnected global brain at 16.00 CET today, we hit up Eiki Helgason to shoot the shit and find out what to expect….

First up. The name, Pepping!? It sounds like some kind of sexual deviance that you could wind up in jail from performing. What’s the story behind that?

Hahaha, no it’s not that good. It’s a Swenglish (mix of Swedish and English) word that we started to use. It means being pumped and stoked at the same time. Maybe later on we will come up with a new sex position and call it ‘Pepping’, whatever it will be it’s gonna blow your minds.

Me, Halldor, Gulli, Tor Lundström, Ethan Morgan, Eero Ettala, Fredu Sirvio, Kareem el Rafie, Leo Crawford, Toni Kerkelä, Risto Ruokola, and a lot of people that sent in footage for the open part, so maybe you are in it if you sent us your shots.

Who’s not in it that you wish was in it?

The rest of the 7/9/13, Lobster, Hoppipolla and Switchback crews, and many many more. If we would have everyone that we like in it then the movie would be at least one week long.

What can we expect from it?

You can expect to be pumped and stoked to go out and ride with your friends and do random stuff after you watch it.

If Pepping! was a cocktail you could order at the bar, what would be in it?

If Pepping! was a sexual act that DOESN’T LAND YOU IN JAIL, what would it be?

Something that only few people would be able to perform, because it wouldn’t be fun if everyone is doing it…

What’s the perfect ratio of good snowboarding to dicking around for a shred flick? And how does your movie fair on this scale?

I’d say 70% snowboarding and 30% funny stuff. I think that’s a recipe for a banger snowboard movie.

Like last year you had the kids send in shots, some of which will make it to the film. Why was it important to you guys to do this again?

When we were young we always though how sick it would be if we could send in clips to the big movie companies and have a chance to get in, and now that we are making movies ourselves we want to give people that opportunity. I think it’s so sick to see what everyone is throwing down. Keep it up, guys! Unfortunately we didn’t have space for everything so we had to pick out the absolute bangers.

Did you get any messed up shit come through from the kids? And some stuff that made you think holy crap this guy’s good?

Yeah, for sure we got some hammers. We think this could be the Video Part of the Year.

Was it easier or harder making this movie than last year’s?

It was way better for me because I was injured all the time last year. This year I had a good season so I’m stoked. Halldor and Gulli both got injured early season so I had to fill in for both of them, haha!

Is it a continuation of the kind of film Sexual Snowboarding was, or is it a different beast entirely?

It is a similar style. We think it’s a good change to have the riders mixed up through the whole movie, the plan is then later on to release full parts from me, Halldor and Gulli. So things are going down.

What was the most fucked up thing that happened shooting for the movie? Did it make it in?

Gulli’s crash. It was so sick and, yeah, it’s in the movie. His collarbone got all fucked up.

How has been Coach Thunder’s feedback been on the project? Have you finally made him proud?

He is never proud. He makes us feel so shitty and worthless so we keep trying to push ourselves to the limit to get better shit for the movie, haha.

Hard sell time. Why should we watch this? Are there any triple corks or people winning big trophies or shots from large helicopters with cameras that cost more than I make in several years?

There is a triple! But no trophies. We do have heli shots but the heli itself is not so big  – the shots came out sick though. But you should watch it because its a good change from all those super serious films out there, it’s more done so people can get pumped and stoked at the same time!

Finally, that drink with angel wings just won this week’s global marketing domination competition by having some dude jump from a biiig condom in space. Being that you’re backed by Monster, how will you outdo this? Mars? Uranus? You must have something planned…

We did some trips to Mars and Uranus with a layover on Jupiter, actually, but we had bad luck with the weather so we didn’t get anything that made it into the movie. Maybe next year!

Nike will drop part 2 of their self-titled Snowboarding Project any minute now, so we took the opportunity to hit up Louie Vito, get the...

What has been soberly called "Eiki Helgason's full part from the 2011/2012 season" on Helgasons.com we call an absolute fest of hammers.

KBR's latest free full movie is now LIVE and features some of Finland's best up-and-comers getting their freak on. Their best movie to date? You...

Nike will drop part 2 of their self-titled Snowboarding Project any minute now, so we took the opportunity to hit up Louie Vito, get the...

What has been soberly called "Eiki Helgason's full part from the 2011/2012 season" on Helgasons.com we call an absolute fest of hammers.

KBR's latest free full movie is now LIVE and features some of Finland's best up-and-comers getting their freak on. Their best movie to date? You...

THE APP FOR SKATE- AND SNOWBOARDING OUT NOW WORLDWIDE.

Antti Autti and friends are back with their second, full-length shred flick focussing on a-grade, yet accessible, snowboarding. Relate to It is 24 minutes full...