Nils Arvidsson is a veteran of both the streets, the park and the backcountry. With a few seasons of juggling following the contest circuit and filming his attentions shifted more to movies and he hasn’t looked back. His credits include Standard Films and Absinthe, along with some Scandi flicks and for his sponsors’ team movies, and he even graced the cover of our dearly departed print mag.

A man with a memorably fine front 10 shifty-shitfy in his sack of stunts, he’s as adept on booters and slaying pow as he is downtown, not to mention the fact that Nils was the first dude we ever saw try to crack the triple cork code. This fella has previous when it comes to riding fast, loose and hard. In short: all the attributes needed for a stand-out snowboarder.

Last winter, Nils’ focus was strictly trained on filming again, both for his own full part and appearances in Boom! and First Layer by his other sponsors Nitro and Vans. “Things were good until I broke my arm really bad in the middle of February, which ended my season then and there,” Nils says yet despite only shooting for half the winter and being ‘super bummed’, in retrospect he was at least content with his footage: “looking at what I got I was kind of okay with it. I normally never get satisfied but at least now I have something to blame it on, haha!”.

Nils has had a long relationship with Rip Curl, so when we decided to take a closer look at their all-conditions Quest jacket, it was only natural that we hit this Swedish G up…

Describe the kind of days riding when you’ll reach for the Quest jacket.

Any day, really. It’s been perfect for the days hiking in the backcountry since it’s light, easy to move around in and keeps the weather out. But right now I’m packing my bag to go to Saas-Fee for some pre-season park shredding and guess which jacket I’m bringing? The Quest!

Can you tell us about some of the features it has that make it so sick for you?

I normally don’t get too geeky with the features, but as far as pockets goes it has all the necessary ones you will need. But the main thing for me is that it’s light, comfortable and good to move around in. Not too thick so you can’t move, and not too light and thin so you get cold. And the material is good; I had no problems with getting wet so far!

How would you describe the fit? And the overall style?

It has a loose, relaxed feeling and you can also notice that it’s a jacket with nice fabric when you wear it. I really like the fact that it looks pretty basic but has all the features you need on the mountain. The olive green/black colourway is perfect!

What do you tend to wear underneath? Is it warm enough to run with just a base layer or do you need a mid layer too?

It totally depends on the day. I normally don’t get too cold and have been doing fine with just a base layer underneath. But since it’s light and quite thin there is still good room for a mid-layer if you need. So far I’ve only brought a mid-layer with this jacket up the mountain once, and ended up having to take it off because I got too warm.

How much input do you have in the design of the outerwear?

I had quite a lot for some time when I helped design my own jacket with Rip Curl but now I can’t say I’m involved as much. But at least once a year we all meet up in Hossegor [Rip Curl Europe HQ], look at some new stuff and talk about what we think and so on!

What kind of riders would you recommend the Quest jacket to?

I would recommend it for the shredder who stays on the mountain long days and needs a jacket that stays dry and is good to move around in. But also works great in the park, or just walking to the bar. 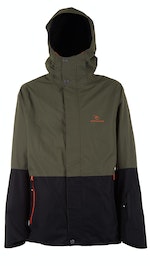 Since 2009 Picture Organic Clothing has been on a mission to make technical mountainwear that is mindful of the planet on which we play on,...

Austrian boss Clemens Millauer gives us the 101 on his go-to setup for freestyle park boarding...

The pan-global Snackbreak mafia have just dropped Deviate – the follow-up to last year's stormer Honyos – and it's a banger. Check the crew slay...

We pitched up for one of the sickest season kick-offs around last weekend - the Stubai Opening - and cut together a techno-tastic edit of...