All photos by Sani Alibabic unless stated.

With the 2016/17 season packed full of events around the globe, winter’s been pretty non-stop for Spencer O’Brien, but off the back of her rad ladies-only ‘VIEWS from the Village’ kicker session we managed to catch up to check in on her thoughts on where women’s snowboarding stands right now.

Hi Spencer, great to see you back with the second edition of Views, you had a new location at Sunshine Village this time, how was this year’s session different?

I had originally intended to continue the shoot at Whistler, but due to scheduling conflicts I had to look elsewhere. In the end I jumped at the idea of continuing the name of “Views” and changing the scenery.

Sunshine Village was amazing, it’s an incredible resort that’s family owned and has an insane backdrop. Their builder Ben Suullarik is a total legend and really went above and beyond for us.

“This year was the biggest jump in progression I’ve seen in my career and I think a lot of it has to do with the inclusion of Big Air.”

Do you think the boost in numbers of women’s Big Air comps has affected progression this winter?

Absolutely. I’ve been saying it for years now and fighting hard for us to get into Big Airs, especially the snow ones, as it’s been such driving force in progression for the men. This year was the biggest jump in progression I’ve seen in my career and I think a lot of it has to do with the inclusion of Big Air.

A lot of riders seemed pretty fatigued at the end of the comp circuit this year, is the extra Olympic discipline doing more harm than good in some ways?

I don’t think that’s due to two disciplines but to the lack of a real tour. We’re forced to do all these FIS events to qualify for the Olympics but then need to do the bigger events like X Games and US Open as well. If all the events spoke to one another and worked a bit on the schedule we’d see a lot

If all the events spoke to one another and worked a bit on the schedule we’d see a lot less injuries and burn out. A lot of riders had to fly back and fourth from Europe to the US for over a month this year. Great for air miles, not so much for your body or mind.

Below: Talk about a backdrop! Spencer over the 70ft Sunshine Village kicker.

“If all the events spoke to one another and worked a bit on the schedule we’d see a lot less injuries and burn out.”

A few years back you were pretty vocal about making sure that the Women’s Tee wasn’t a feature on the comp circuit – have your views changed at all since then?

Not at all. I think it’s another reason we’re seeing such a push in progression right now and it’s also why I choose to have a larger jump for “Views”. Progression isn’t just another spin or flip, but also the size and way we hit features. The generation of girls coming up will never have to experience a “ladies tee” so it’ll never be a factor for them.

We’ve just seen that female skater Jordyn Barratt’s been invited to compete alongside the men in the Dew Tour, do you think we’ll ever get to that point with snowboarding?

That’s so damn cool, I’m excited to watch that. With the crew of ladies coming up right now I don’t see why not. Anna Gasser, Klaudia Medlova, Hailey Langland, Miyabi Ontisuka and Julia Marino are just a few of the girls who I think will be taking women’s slope riding further than anyone thought. I watched Kokomo Murase do cab 9 to back double 10 in Mammoth a few weeks ago and the girl is 12. The future is in very capable hands.

“Anna Gasser, Klaudia Medlova, Hailey Langland, Miyabi Ontisuka and Julia Marino are just a few of the girls who I think will be taking women’s slope riding further than anyone thought.”

We last interviewed you after that incredible Nine Queens session a couple of years ago, this year’s event was obviously littered with injury, especially for the ladies. With the number of women at the top level in snowboarding, is injury a bit of a limiting factor when it comes to keeping a progressive momentum going?

Of course, but the size of the field and amount of talented women is only rising. Injuries are a part of the game and we all understand that. It happens to everyone at some point, but I don’t think it’s going to slow the momentum much.

For us, it was a bit of a shame to see Nine Queens get rolled in with Nine Royals this year. Do you feel like the circuit this year missed out on an event?

I don’t think so, it was a really cool opportunity to be at that event with the guys and I think that format could work well for both genders. I hope they do it at least once more to see what could go down. I’d also like the chance to ride it and not watch haha.

“As sick as all the doubles are, I’d love to see them get paired with other big spins before we see girls sending triples.” 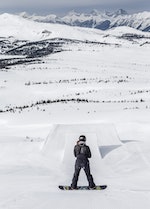 Recently we’ve seen kids in the Junior World Champs landing triples, do you any of the girls have one on their radar right now? Who could be first?

I’m not sure, but I can’t speak for all the ladies. As sick as all the doubles are, I’d love to see them get paired with other big spins before we see girls sending triples. I think those more technical tricks into doubles are coming though so I’m sure triples will follow shortly after if not before.

Assuming you’re keeping Views going as an annual thing (we hope you are!), where would you like to take it next? Is there anyone you’d like to see stepping up there in the future?

I want to expand it to more than just one jump. I’d love to be able to do a few features next year and invite a bit of a bigger crew with a few younger riders in the mix. Only time will tell haha.

Watch Spencer’s ‘VIEWS from the Village’ session in full below:

https://www.youtube.com/watch?v=KksO-nqjOH4 Travis’s first video part was shot all of 17 years ago, and it’s still banging. Legend has it Travis Rice rolled into Superpark at the end...

Check this season's selection of powtopian bangers from Swiss ripper Mat Schaer, that made up his part from Absinthe Films' AfterForever. This is SICK.

Buncha bosses give it some tech and style in the 2 Alpes stunt ditch.

The Instagrams we posted in the 2016-17 season that had you most hyped. Daaamn, there's some gold in here...

The legendary first team movie from the legendary Forum team gets the Flashback treatment. Click play for some madness from the year 2000...