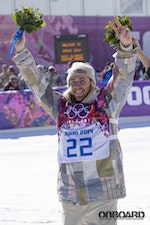 As you probably noticed, Sage Kotsenburg is all over the US TV at the moment, but he still found some time to answer a core mag like us, so props for that too big boy! Here’s the fresh and exclusive interview with the ‘Spoice’ man in gold.

I thought about the 1620 about 20 minutes before finals.

Sage, first of all congrats from the whole Onboard mag crew! As we wrote it before, your run “oozed more style than Daniel Craig in that Casino Royal poker scene”! We even said it was the best thing that could happen to snowboarding.

How did you manage to relax on this course that everybody seemed scared of?

Yoo thanks guys! Haha yeah I just stayed positive the whole time we were in Sochi, there was so much bad press from the course and even just in general in Sochi so I just went in with a fun attitude stayed relaxed because there is a ton of pressure at the Olympics. I think that benefited me just staying calm a lot of people had the weight of high expectations on them and I was just kind of there, full dark horse haha.

So what does a Olympic Gold medalist does after such an event, and such a win? Back home chilling?

I actually just got home after 2 weeks of media frenzy all over the place it’s been crazy! Now home for a few days though i’m really excited to hang out.

What does people ask you the most about: the Holy Crail, or the 1620? Did you ever land those on training?

Haha yeah so many questions about those two tricks. Usually it’s the 1620 because I never have tried that trick before in my life haha. It just felt right on thay day I have never been so comfortable on a course so I just winged it and stomped. Pretty crazy haha.

How long before did you plan to include those in your run? Did you feel it was the only way to try and make the gold?

I thought about the 1620 about 20 minutes before finals, I knew if I did a 1620 i could probably get on or close to the podium so I just called my brother and was like ” Yea man I might go 1620 and just send it why not ya know?” And Blaze said “Sure you aren’t just gonna go 14? Actually nevermind man just go send it and have fun you made the finals at the Olympics man go do what you do you’ll get that!” After hearing that and Bill Enos (US Team Coach) say the same thing I just was gonna go snowboard and have some fun and send it and it ended up working out haha.

It opened up the worlds eyes that hey there is actually snowboarders to watch and get behind besides Shaun White.

You’re not the typical contest dude and you haven’t won that many events before. Is this win make you want to ride more contest, and also does it put more pressure doing so, or is it more like ‘well I won this now, so I can just sit back and enjoy going to other contest sand see what happens’?

Yea I have only won 2 contests my whole career one was the Mammoth olympic qualifier last month and the other… Olympics haha. I don’t know how it’s gonna make me feel about contests, right now i’d rather not do any the rest of the year man I am so burnt out on them we have already done 8 or 9 and it’s not even march! I need to film some powder now!

Would you exchange your medal to say the best winter ever, with a lot of pow and a sick video part in the end?

If it’s not too much too ask can I have both? Haha. As I said i’m off to go ride powder hopefully film a bit of a part probably just ragdoll my face off in the pow though hahaha. It would be so cool to film a full part it’s a big goal of mine now for sure.

Did Shaun came up and speak to you after he withdrew from the Slopestyle? Or did you have any words with him at all?

No man, Shaun just kind of sticks to himself after the mountain I have no idea where he goes he just disappears and I know he had a lot on his plate he was going for the 3-peat in pipe which we all know didn’t work out so well for him but it was crazy he withdrew from slope. It was nice actually because it opened up the worlds eyes that hey there is actually snowboarders to watch and get behind besides Shaun White. I honestly think he just isn’t used to adapting to a course like that as well. All of us riders are used to adapting to a course that might not be perfect at first but he is always riding perfect private pipes and parks when you put him in a non perfect course or pipe I think it’s hard for him to adapt. No disrespect at all he is an insane competitor and amazing snowboarder that’s just how i see it could be totally wrong who knows.

You’ve been on many TV shows since you got back to the US, how does that feel? Anything stupid they asked you to do?

Haha thankfully not so much yet, i was singing a song once in russia and they were filming it I hope it doesn’t tune into the next 12 days of Sochi I would be soooo not stoked hahaha!

Do people actually recognize you in the street now?

Yea it’s actually insane just airports, restaurants, walking down the street in New York it’s pretty wild. Not used to it yet and don’t know how used to it I will ever get I am not one to want to be recognized that much I just like keeping to myself, i’m just a kid who snowboards ya know? It’s really cool to meet the people who were watching and supporting though because those are the people you do it for. They get so excited to meet you or to hold the medal i had one lady break down crying tears of joy because I let her wear my medal in a picture it made me think. A lot of how big the Olympics actually are.

What have you done with your medal? And is there any other stuff an Olympian Gold medalist brings home with the medal?

I haven’t got a chance to do anything with it really because it’s been so hectic, but I made a sandwich with it in the middle once. Not that cool but… It happened haha.

Any plans for the rest of the season? Any trip to Europe planned?

Yep! Europe next week! Powder, tomahawking, and strict training program with Halldor and Ethan starts next week! We’re going to film some pow and get away from everything, just go try filming a bit of a video part, that’s definately next on my list!

Read all about Sage’s historical win on the slopestyle here. And our Sochi roundup here.

Eero, Lauri and Hekki are back with more urban snowboarding that will blow your mind

Watch the Austrian maestro and the US badboy go nuts in tit-deep conditions exclusively here for the next 48-hours. Trust us, you won't want to...

Eero, Lauri and Hekki are back with more urban snowboarding that will blow your mind

Watch the Austrian maestro and the US badboy go nuts in tit-deep conditions exclusively here for the next 48-hours. Trust us, you won't want to...

Check out some of the insane terrain these guys are riding...

Da Kine Poney Session 2014: it's just around the corner!

From 20th to 23rd of March in Saint-Lary, France

Da Kine Poney Session 2014: it's just around the corner!