French snowboarder Arthur Longo has been bossing it on the competitive halfpipe scene for years now. As well as gearing up for the Olympics in Sochi this coming February, Arthur also has a starring role in burn’s excellent new interactive snowboard movie #RideAgain. We caught up him with to talk about the project, and get his thoughts on snowboarding and the Olympics. 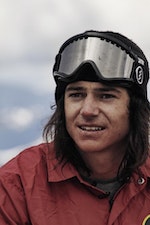 What up Arthur! So, what’s it like being part of the burn team?

Since the beginning burn have been creating and developing cool content and projects. It’s cool to be a part of it and be teammates with Stale, Gigi, Sven, Werni… So many good riders and personalities!

When did you first hear about burn’s #RideAgain campaign?

They came with this project at the end of the winter, which was a bit late to shoot some pipe in Europe, and that’s why we shot again during fall in Saas Fee.

Could you briefly explain the concept of the project to us?

Well, the idea was to create an interactive movie with the riders of the team that would go to Sochi. They made small clips around 4 words; fun, creativity, progression and style, which are to me what snowboarding is all about.

What was the most fun part about filming for it?

The cool thing about this shoot is that we really did it as a team. It’s not that common to be riding features all together. There were a lot of people I liked on this shoot, that made it fun…

We heard that the Pirates were involved with the filming of the project and you’ve obviously filmed some sick parts with those guys. What was it like working with them on this?

Watch Arthur’s ‘Style’ edit from #RideAgain below:
You have both ‘Style’ and ‘Creativity’ parts. Which do you think is more important in snowboarding and why? Which part are you most stoked with?

I actually have only those two cause I was injured during the shoot in Saas Fee. I wish I could have shown better things but when we shot in Austria at the end of the season, the conditions were really rough. Anyway it turned out good.

I like the style one and I think style is the most important thing in snowboarding. You can make the most basic thing look special just cause of how you do it.

Have you definitely qualified for Sochi yet? How many more World Cup qualifier events are there left?

I guess it’s looking good but it ain’t official yet. If nothing goes wrong it should be ok. I’m still doing Copper before Christmas and Stoneham mid january.

Are you excited to go to the Olympics and do you think they are a good thing for snowboarding?

We don’t hear only amazing things about Sochi and Russia so I just hope it’s gonna be better than what we expect. About the Olympics I’d like to not make such a big deal out of it. It’s an exciting contest because it’s only every 4th year and the best snowboarders are going to be there. I think snowboarding can take advantage of such big events and remain the same cool sport… Snowboarding is special and it will always be anyway.

Can anyone beat Shaun?

Hmm, maybe someone we haven’t heard of yet!

Watch Arbor's latest episode and get pumped to go shred!

Which classic part gets your vote?

Watch Arbor's latest episode and get pumped to go shred!

Which classic part gets your vote?

Another sick new part from Will Film For Friday's 'Livin!

Watch Jake Blauvelt and Eric Jackson SEND IT out in BC