Ever since his parents gave him a snowboard and took him on a trip to Nassfeld, Austria, Slovenian Tim Kevin Ravnjak’s life was all about shredding on snow. His compatriot Marko Grilc has known him since he was a kid, and is stoked on his development: “It is really insane to see him progress and grow up. He had insane talent straight from the beginning and he has just been adding style and control on top of that. Nowadays it is rare to see young dudes with really good board control and TK is for sure the one who has it on lock.” And then he adds: “He is a cool kid who is a true Yugo, maybe the biggest of us all. Hehe!”

I used to ski, but at the age of 7 I saw that snowboarding is so much cooler, and so I tried it. Instantly I felt the “connection” and I knew this is the sport I wanna get good at. I love being in the mountains and love being creative. But the thing I like the most about snowboarding is the challenge of improving.

Who were the riders that influenced you when you were a kid?

What movie did you watch over and over as a kid?

I watched so many movies over and over again but I think the most played was Paradox!

How did you get your first sponsors?

There was a kids’ snowboard tour on different mountains in Slovenia and I won a few stops, and that’s how the local sponsors noticed me.

What kind of riding or what terrain do you like to ride most?

I love riding pipe. At first I hated it because it is harder than jumps but once I got the feeling for it I loved every single run. 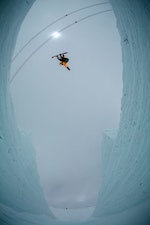 Whose riding stokes you out these days?

What do you think is overrated in snowboarding these days?

Do you hang out much with other Slovenian riders?

Yes, usually with the crew I travel around the whole season.

What else but snowboarding keeps you busy?

School, skateboarding and working out.

You won a silver medal in the halfpipe at last year’s Youth Olympics in Innsbruck. Does this mean you’ll win a medal in the real Olympics, too?

Haha, I definitely hope so! That’s the goal for the future.

Stop what you're doing and watch the Deja Vu movie, in full, right now.

The Burton Summer Camp at Zermatt/Cervinia went off!

Stop what you're doing and watch the Deja Vu movie, in full, right now.

The Burton Summer Camp at Zermatt/Cervinia went off!

Download this sweet shot of Fran Massaguer for your desktop wallpaper here!